+ The General Command of the jordanian armed forces the arab army

A brief about the Radio

The radio also plays a role in the following: promoting the Jordanian Armed Forces/Arab Army locally, regionally, and internationally; highlighting the heroism and sacrifices of the forces’ personnel; identifying the righteous martyrs of the forces and the national figures especially the founders (civilians and military); introducing the Arabic, Islamic, and international military history; educating the personnel of the Jordanian Armed Forces and keeping them abreast of the current events and their impact on the national security; participating in building and polishing the national character.

Speech by His Majesty King Abdullah II, Commander-in-Chief of the Armed Forces of the Arab Army at the inauguration of the Radio
Dear Brothers, the courageous corpsmen the ranks of the Jordanian Armed Forces, peace be upon you..

I am so pleased to address you during this blessed day wherever you are deployed to defend the soil of Jordan and its accomplishments. And to participate in its building process, to achieve its development and prosperity ambitions. I share with you your happiness and your ceremony of inaugurating your radio, the radio of the Jordanian Armed Forces/Arab Army that will be, in Allah’s will, your courageous strong voice that believes in Allah, this Arabic land, and conscience. This radio will be a stage for the truth, knowledge, and free opinion that springs from the love of Jordan, loyalty to its soil, commitment to it as a homeland. It will be conveying its honorable and noble image to the world, and defending it against anyone who tries to harm it or defame its image, stance that sprouts from its supreme interests, or its genuine Arabic heritage..

Media and communication vehicles, in this time, have become an effective weapon in hands of nations and peoples. Your radio, in Allah’s will, will be an additional weapon alongside your weapons, a strength added to your strength, and a Jordanian landmark that all of us are proud of and keen on keeping distinguished. My courageous brothers, I congratulate the inauguration of your radio. I pray to the Almighty Allah to make it a stage of right, strength, and a Jordanian voice that meets the status of Jordan and its Armed Forces that is reputable for its excellence, ability, and fidelity to the military honor. I am all confident that it is going to be as we foresee. Peace be upon you.

A. Medium wave is broadcast on the following:

B. FM Waves is broadcast on the following frequencies 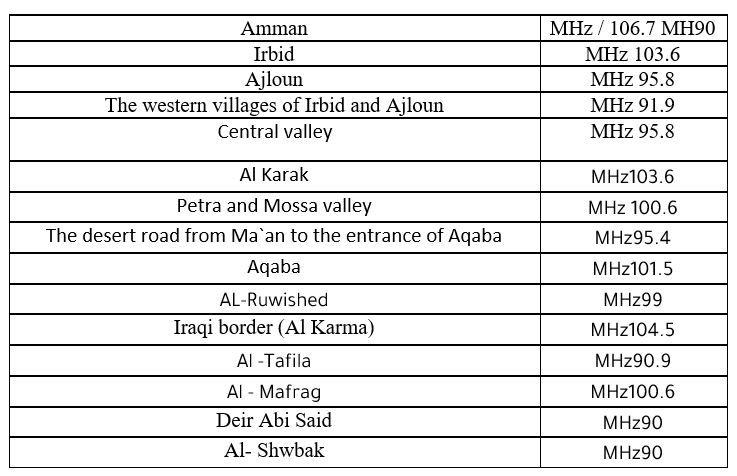